Medical professionals in New York were some of the first in the U.S. to have to grapple with overflowing ICUs and an influx of COVID-19 patients. Doctors and nurses have had to learn as they go, fighting a new disease without any known cure.

In April, Kevin Ching, a physician at New York-Presbyterian Weill Cornell Medical Center, realized that the medical professionals in New York had valuable knowledge that might help save lives elsewhere. So he reached out to Kyle Cassidy, a staff member at the University of Pennsylvania’s Annenberg School for Communication, to help create a VR medical training video that would demonstrate best practices in treating COVID-19 patients.

People from Weill Cornell Medicine, Annenberg, Penn Medicine, Penn Nursing and Penn Libraries all jumped into action to create the training. They wrote a script, cast medical professionals as “actors” and filmed the video at the Hospital of the University of Pennsylvania’s Emergency Department with the Insta360 Pro 2. The result is an open access, VR training video on the resuscitation of a COVID-19 patient with respiratory failure.

We interviewed Cassidy to find out how he approached this groundbreaking VR medical training project. Cassidy is a Penn Model of Excellence Award recipient for his transdisciplinary work with virtual reality and has previously created a VR training for medical professionals on a nasal spray which can reverse opioid overdoses.

1. What was your mission with this VR medical training project?

When we started this in mid-April 2020, New York had already experienced a great deal of COVID-19 cases. Their ICUs were overflowing and they had temporary field hospitals in the street. But there were other areas of the U.S. that had yet to see their first case—people who were still waiting, watching and wondering.

So our mission was to take the specialized knowledge that doctors in hard-hit areas like New York and Philadelphia had learned and get it to doctors in places that had yet to experience a huge influx of cases. We hoped this would help them prepare for what had taken New York so long and so many lives to learn.

2. What advantages does VR have that make it useful in a context like COVID-19 medical training?

The concept of this video is that the viewer is a physician, standing in a room with a patient. Everything around you is familiar, but you might not know the newest and best techniques and practices.

The video uses superimposed text over what is taking place to show you what an experienced doctor would notice about what’s happening. This includes a myriad of details like ventilator settings, the proper dosages of various drugs, the best way to perform an intubation to reduce exposure to COVID-19, and even simple things like shutting the door behind you to minimize exposure of other areas in the hospital.

In this really fast paced environment, things are happening all around you and people are working on all four sides of the bed at once. We wanted this to be an experience rather than just a training film.

3. You turned this project around very quickly and at a time when it was difficult to bring people together. What challenges did you face?

The willingness of the medical professionals to make this happen was really astounding. I think this might be the fastest video project I’ve ever worked on—from first discussion to filming was around seven to ten days. Doctors volunteered to participate, hospitals donated spaces to use and many people helped write the script.

The speed at which it came together was astounding because everybody was highly motivated. They believed that this training would save lives and the desire to turn it around quickly was pervasive. I remember having Zoom meetings where people were talking about the growth of the pandemic and what it might mean if this came out one day sooner or later in terms of the number of people affected.

The thing that took the longest was actually the paperwork. I had to get permission to go into the hospital, get all the organizations to sign off on the video, get proper disclaimer text and things like that. But in this case, everybody was really functioning at an accelerated pace because they all agreed it was important.

All of the doctors and nurses who worked on this as actors had just completed a 12-hour shift treating COVID-19 patients. They stayed an extra three hours to film this and they didn’t get any extra pay or comp time. They did it because they didn’t want doctors in Arizona or North Dakota or wherever to go through what they’d just been through that very evening. That was everybody’s motivation.

4. How are medical professionals watching the VR medical training so far?

We distributed it through medical mailing lists, so it’s been entirely doctors sharing it with doctors. It’s been viewed, at this point, over 11 thousand times.

We did an initial survey and found that, at least when it was released, almost everyone was watching it on a flat screen, like on their phone or computer. This was largely because everybody was unexpectedly at home and were quarantined with the gear they had available. But hospitals can also easily order very inexpensive VR headsets like the Google Cardboard in bulk and distribute them to medical staff.

Hospitals can easily order very inexpensive VR headsets like the Google Cardboard in bulk and distribute them to medical staff.

The feedback after the initial rollout was overwhelmingly positive. All respondents agreed with two statements in particular, while the majority said they “strongly agreed”:

Going forward, we’re still trying to figure out what the new normal way of teaching is going to be. I think that watching VR at home can be a part of it, especially in places like medicine where traditionally learning is done by watching and doing. It’s easier to watch in VR, especially when you have a camera like the Insta360 Pro 2 that’s recording in 8K 3D. You can bring places and events to people rather than the other way around.

5. What other VR training projects are you working on right now?

We’re also producing 360 videos that bring students to places that are either difficult to access or difficult to reserve. So, we’re taking videos in ambulances and helicopters and supply closets—places where you can’t easily bring 50 or 250 or 1000 students. You can send them home with a Google Cardboard headset instead and say, “Watch these four videos this week and we’re going to talk about how to get out of an ambulance in an emergency.”

The Annenberg School is very interested in the future of remote teaching, obviously because classes are being taught remotely now. But also, because it provides an opportunity to bring resources to underserved areas—places that might not have teaching access to an ambulance or a helicopter or a doctor who’s treated dozens of COVID patients.

360 video, especially in very high definition, lets us bring things to people that might be otherwise difficult. As wonderfully resourced as UPENN is, we don’t have canyons, deserts, or rain forests for instance. We have faculty and students working all over the world and this technology gives us the opportunity for them to bring their experience back here as well.

I think the lockdown has taught us that there are so many things we don’t need to travel for. Immersive video is just going to make doing things remotely that much easier or at least different. It saves time, money and it can reduce our carbon footprint.

360 video, especially in very high definition, lets us bring things to people that might be otherwise difficult.

In January, I presented a VR video at a medical conference in San Diego and instead of flying there, I just recorded my presentation with the Insta360 Pro and attendees watched in VR. I didn’t spend three days traveling to give a 15-minute talk and the people who were interested in talking just emailed me after. I felt like that was a bit of a victory.

Keen to keep up to date on Insta360 user stories? See the latest and join in on the discussion by joining Insta360’s user group or signing up for our mailing list. 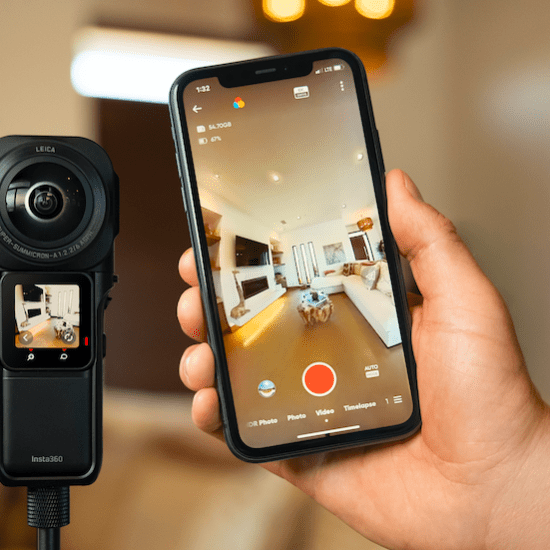